Dan Piepenbring, The Paris Review, June 24, 2015
Open a larger version of the following image in a popup:
KEN GRIMES, UNTITLED (THE DEEPEST SEAS)

Like Richard Sharpe Shaver, a midcentury sci-fi writer who believed that an ancient civilization had embossed its complex history into “rock books,” Ken Grimes is convinced that humankind has defined communication too narrowly. A self-styled “visionary artist,” Grimes paints chiefly in acrylic on Masonite boards, and his subject is extraterrestrials: their existence, the deceptions surrounding that existence, and the cosmic synchronicities that reveal their presences. He looks for hidden messages from aliens in astronomy texts. “These are professional writers who have editors and proofreaders,” he told Wired, noting that the mistakes of such writers still tend to follow patterns. “They’re experiencing alien spirituality. It’s right in their face and they can’t even see it.” Grimes is schizophrenic.

“Text Messages,” his new show at Ricco Maresca Gallery, makes pronouncements on everything from abduction stories to Soviet radar systems to DNA mutations caused by supernova radiation. The paintings, with their stern block capitals and monochrome palette, can read like propaganda for a startlingly ambitious space program. Their prose style is hypnotic—a barrage of toneless language with hyperspecific reference points, taking it in is roughly akin to being buttonholed by a lonely Carl Sagan enthusiast at the planetarium.

This is not to say that Grimes is a mere crank. His project is more lucid than that. Like the best episodes of Star Trek, his work valorizes a kind of restless, humanistic curiosity. If he sees space as the site of our gravest conspiracies, he also ennobles it; it could save us. “I’m interested in trying to define space as a way of looking at possible other civilizations out there,” he told PBS:

I really think space in its infinite vastness is kind of frightening in some ways. I live on a nice planet with blue skies and oceans, but I think to go out into space is really kind of scary as far as unknowns. We’d be very alone out there, and I think we feel that kind of isolation out there already, in our kind of scientific and cultural identity. In a sense, a search for extraterrestrials in space or right here on earth is a search for ourselves. We’re trying to understand our relationship to others in the universe and make sense of everything.

“Text Messages” is at Ricco Maresca Gallery through July 25. 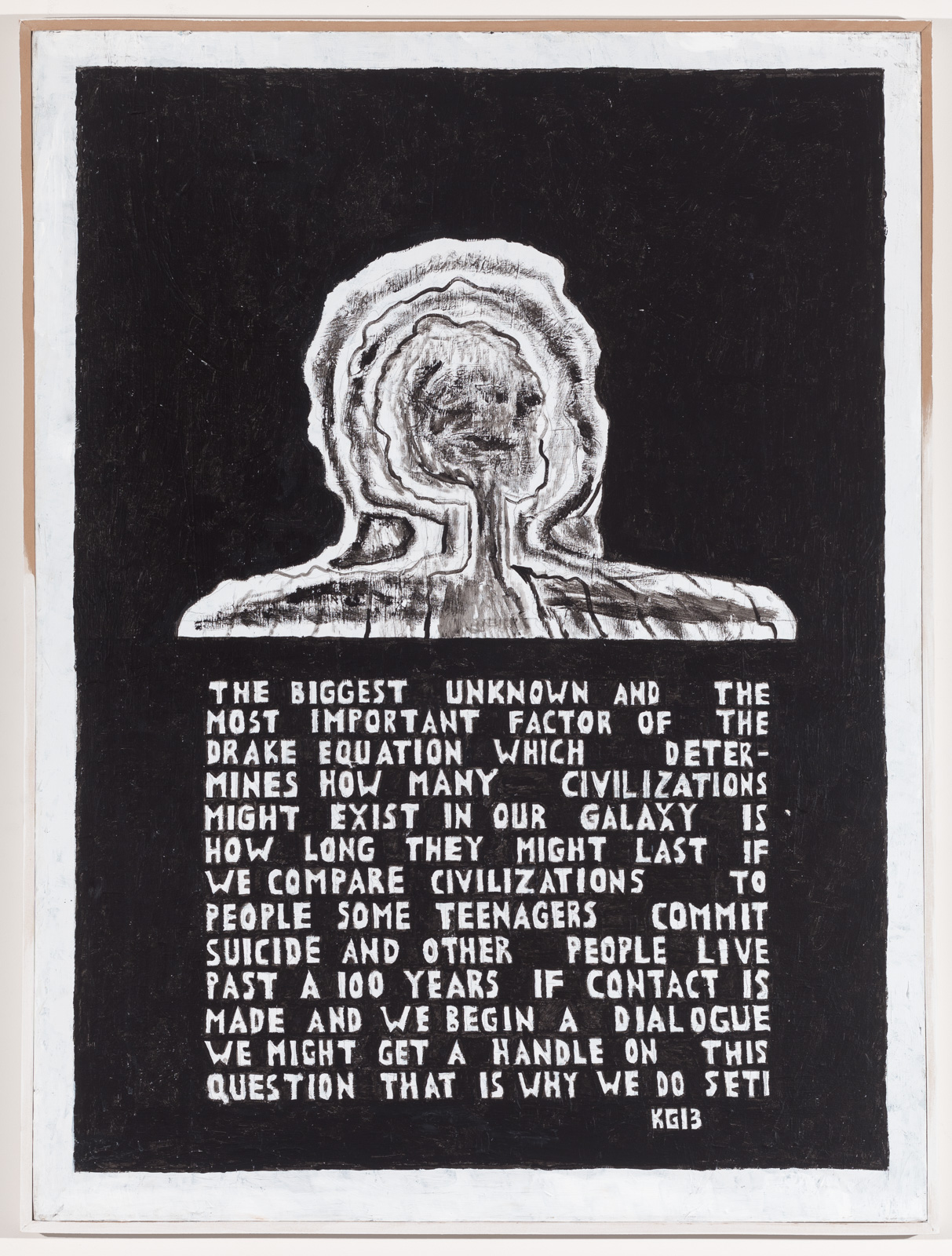 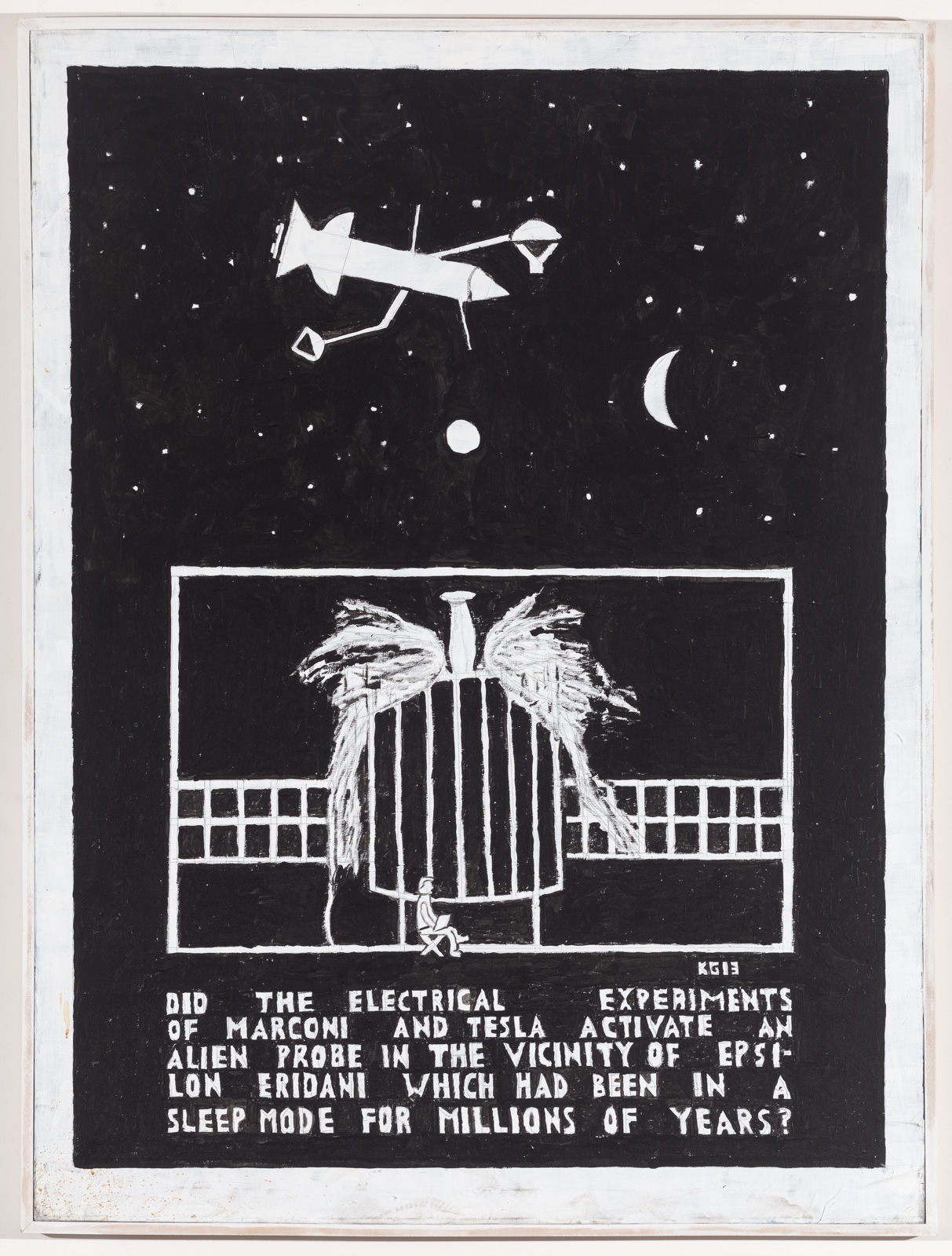 UNTITLED (THE ELECTRICAL EXPERIMENTS OF MARCONI) 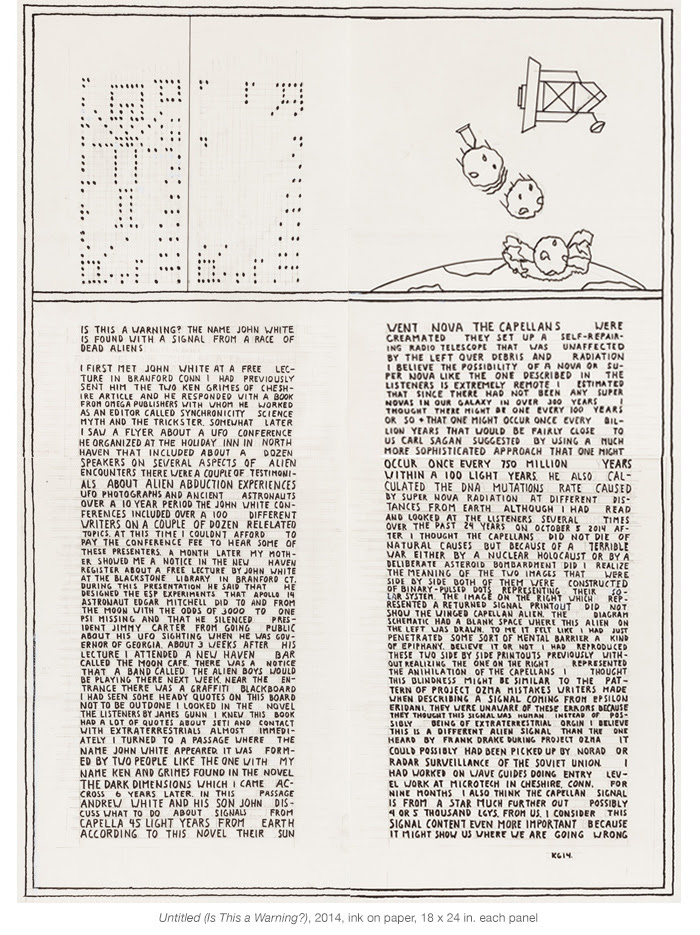