The Female Identity, Discussed in Art

Douglas P. Clement, The New York Times , April 1, 2016
Open a larger version of the following image in a popup:

The Barbie doll and her brand of ideal beauty debuted in 1959, and since then she sometimes has been at the center of a debate about society’s depictions of women. Critics have complained that Barbie conveys harmful messages about body image to impressionable girls, while others have defended the petite blonde as a miniature representation of an adult woman who breaks glass ceilings.

In January, Mattel made Barbie more diverse, saying it would make her look more like real women. “The new 2016 Barbie Fashionistas doll line includes four body types (the original and three new bodies), seven skin tones, 22 eye colors, 24 hairstyles and countless on-trend fashions and accessories,” the toymaker said, adding, “Because With Barbie You Can Be Anything!”

Mattel tied the no-limits sentiment to the idea that “girls everywhere will have infinitely more ways to spark their imagination and play out their stories,” leaving room for hope of an understanding that self-esteem, confidence, respect and success do not depend on having a perfect body or hewing to society’s worship of surface beauty.

Love or hate Barbie, the issues the doll represents remain fertile ground for artists, as demonstrated in a powerful show at ArtsWestchester in White Plains called “SHE: Deconstructing Female Identity.”

In the grand gallery created within the former People’s National Bank & Trust Company, works by 11 New York artists explore the continuing struggle of women “to redefine themselves in the face of shifting societal values, changing perceptions of femininity and the choice between domesticity and executive leadership,” as Janet Langsam, the longtime ArtsWestchester chief executive, describes it in the exhibition catalog. 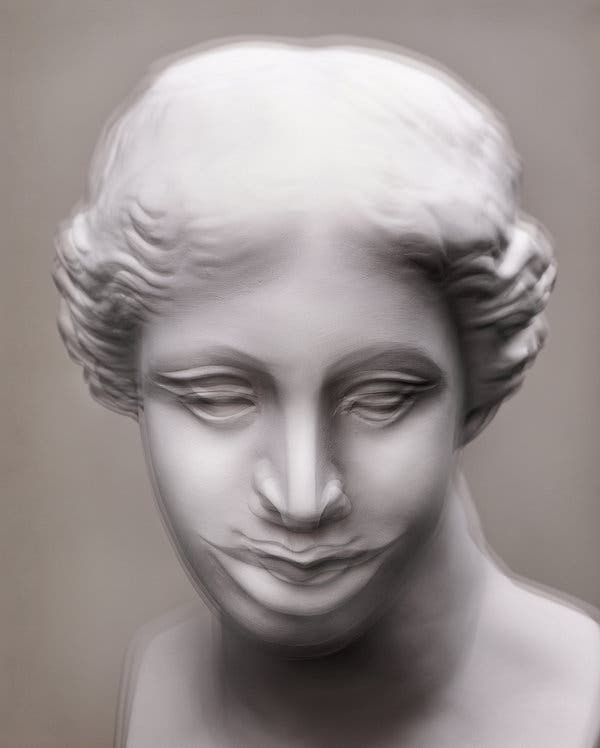 “We knew this was a timely topic,” said Kathleen Reckling, the gallery director, adding that the planning of the exhibition started before Bruce Jenner identified as Caitlyn Jenner and incited a national conversation about gender identity. “‘SHE’ spotlights the challenges contemporary women face in defining contemporary ‘womanhood.’”

“In the back of my mind was the idea of the ‘true woman,’” Ms. Reckling said. The historian Barbara Walter noted in 1966 that since the Victorian era, the “true woman” has been defined as possessing four core virtues: piety, purity, submissiveness and domesticity.

None of those qualities is evident in the monumental female presence that greets visitors as they enter the exhibition: Nancy Davidson’s “Maebe,” an abstracted, exaggerated body form in inflatable latex, squeezed into a giant blue corset, pays tribute to Mae West, the sex symbol and champion of sexual liberation.

Surrounded by a net and “seemingly tethered” to the gallery floor with ropes and sandbags, “The bulbous and comical form of ‘Maebe’ is at once trapped and yet on the verge of an escape,” the wall text explains.

Also offering commanding presences, but in a different way, are the nearby photographic prints of Debbie Han, a Korean-American artist.

“She’s been very much focused on this idea of ‘What is ideal femininity and what is ideal beauty?’” Ms. Reckling said while giving a tour of the exhibition.

This series of prints, Ms. Han explains in wall text, combine “the photographed bodies of multiracial, multi-ethnic women with European classical sculpture heads, and digitally renders each figure from head to toe in the original skin color of the model,” adding, “These hybrid figures of human and goddess, ideal and actual, past and present, ultimately imply core human experiences — reflecting on the meaning of being human in the seeming complexities of contemporary societies.”

The works of Ms. Davidson and Ms. Han may be among the first and most magnetic pieces visitors encounter, but the level of mastery and intensity on display is consistent throughout — as the artist Valerie Piraino makes reference to the African diaspora in small sculptures that Ms. Reckling likens to “ripe fruit on the verge of spoiling,” and as the artist Laurel Garcia Colvin transforms an entire gallery into a room dedicated to the history of feminism.

The large, intricate sculptural installation of Kathy Ruttenberg — called “Nature of the Beast?” — has an “Alice in Wonderland” feel, Ms. Reckling said. The heart of the story being told by the installation is that “the only way to a guy’s heart is through his penis,” she said.

A few days before the opening on March 13, upstairs from the cultivated curves of “Maebe,” the Caribbean-born artist Nicole Awai was working on a wall and floor installation that feels like a dark paean to the primeval oozing “materiality” of history. “We are these things,” the artist said. “We are millions of years of this.”

Nail polish figures prominently for the artist as a material in her works on paper, which center on contemporary interpretations of a topsy-turvy doll, or two-sided conjoined figure, an image Ms. Awai says embodies “the flux of identity, time and history, the perpetual orchestration of the condition of being female.”

The doll is set against technical drawings and a “sensation code,” a meaningless cipher, that is like a color chart defined by names from nail polish bottles, such as Drama Queen and I’m Not a Tourist. Together the elements and the media used “disrupt the ways viewers are used to reading people and works of art,” by relying on visual codes to create a subject’s narrative. In this case, Ms. Awai said, “We don’t know the language. That’s the point.” 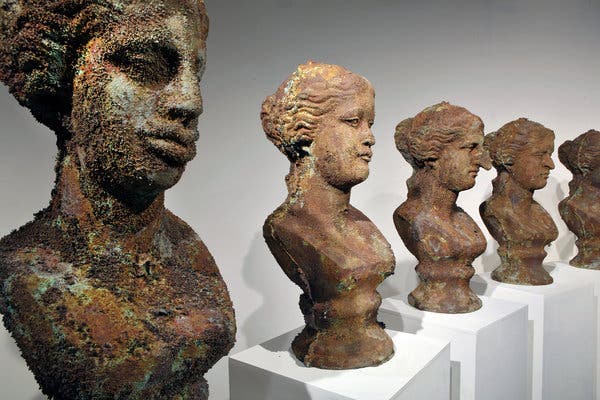 Using visual codes to decipher identity is personified through Marcy B. Freedman’s mixed media performance, “You Are What You Wear,” in which Ms. Freedman explores the issues of appearance and perception by allowing the audience to choose clothes for her to wear. Ms. Freedman creates and presents an adaptive persona based on the outfit chosen.

“Hopefully, this performance will provoke thought about the ways in which women are ‘pigeonholed’ by their wardrobes — forced to dress and behave within certainly culturally established parameters,” Ms. Freedman says in wall text. The artist is scheduled to have “You Are What You Wear” performances April 21 from noon to 5 p.m.

Ms. Reckling asks in a catalog essay if progress has resolved women’s crisis of identity highlighted in Betty Friedan’s 1963 book “The Feminine Mystique

“Likely not, nor will it,” the curator says in the essay. “The battle over our individuality is an ongoing one, and each age ushers in a new set of norms and ideals to rally for or against.”

Whatever the status of the battle, “SHE” intelligently advances the conversation while also being visually stunning.

“We like to do exhibitions that tackle issues that are out there in the community and the world,” Ms. Langsam says.

Notable coming events tied to the exhibition include “Fashion SHEek: Teens Take the Runway” April 15, in which former prom dresses “get an upgrade and return to the runway in a fashion show,” and the April 16 workshop “Beyond Wonder Woman: Make Your Own Action Hero.”