Amanda Gluibizzi, Brooklyn Rail, July 14, 2021
Open a larger version of the following image in a popup:

As they were planning their joint exhibition at Ricco/Maresca, Alice Hope, Bastienne Schmidt, and Toni Ross agreed to choose an evocative object from the collection of the Metropolitan Museum of Art that would serve as an organizing principle for each artist’s portion of the show. To their surprise, all of them chose the same piece: an Oceanic navigational chart from the Marshall Islands (a rebbilib). On second thought, though, perhaps it isn’t that unexpected: the three share an interest in archaeology, in artefacts, in wayfinding, and in the meanings their materials suggest. And the stick chart is itself an exceptionally charismatic object in a museum of charismatic objects. It would certainly be in my top 10.

Marshallese navigators constructed and used navigational charts to help them to conceptualize long-distance ocean voyages. Made from coconut leaf midribs, and often festooned with shells or other organic markers, the charts imagine giant bodies of water. Though sometimes referred to as maps, these charts are far more conceptual than any map. They did not travel with the navigator: at nearly four feet wide, the chart at the Met would be too cumbersome to bring into an outrigger, and to think that they would be read as a paper or GPS map is to miss the point. Navigators constructed them not only to visualize the sea, but to feel it as well. They are mnemonic devices rather than simultaneous guides, and may function more like memory palaces than reference maps. In Alfred Gell’s formulation, they are models as well as implements, memory machines that do their work specifically for their maker and only at a remove from that person. They tack dry but work wet. 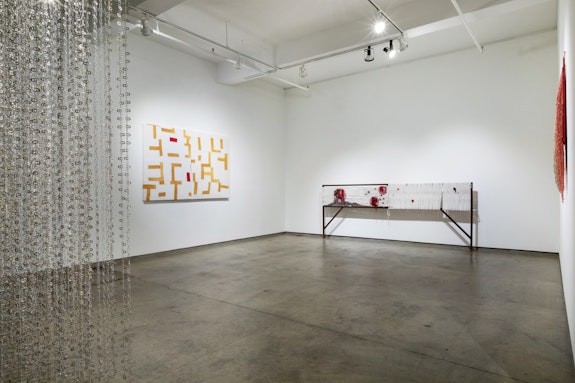 Even more than that, and what the artists at Ricco/Maresca seem drawn to, they are a type of “clever object,” one that sticks (to) you, and in the pricking pries something open for you. For Marshall Island charts plot not only the swells, but also the unseen generators of those swells. Though at the Met the chart hangs on a wall, it is not two-dimensional and was meant to be understood through and under and around the back; it reveals both the seascape and fish-eye view. No W Here showcases objects that deploy this doubled perspective as its title does the same, situating us nowhere and just here all at the same time.

Toni Ross includes several textile works that encourage close looking. Particularly appealing in regard to the exhibition’s themes is a small series of line drawings constructed from twine twisted into loops and knots. If we’re being literal, we might think of sailors’ knots and the various ties that perform different tasks, each one designed for a certain job. But her spirals and kinks move beyond the practical to the art historical, calling to mind, in Cursive Drawing #5 (2019), Cy Twombly crayon scrawls and, in Cursive Knots #1 (2019), Hannah Wilke’s tiny gum eraser vaginas. Bending in, we notice that each knot in the latter casts a miniscule shadow—it has a front and a back, a before and after—and that the thread in Cursive Drawing #5 pools to form a lemniscate only to offer release with fraying ends splayed out just a bit beyond the central massing, some knots tied sporadically in to give us pause as we go. 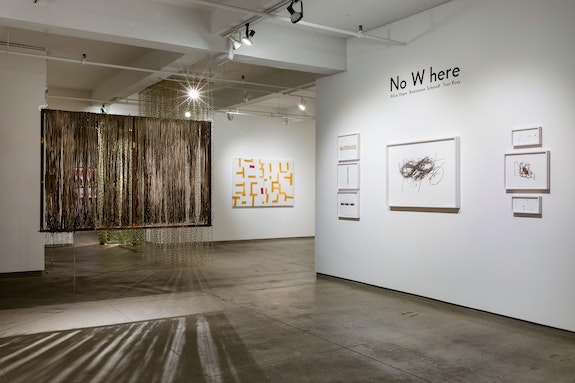 Bastienne Schmidt’s works, too, at first evoke boats and the sea, her Canoe Grid (2021) forthrightly acknowledging such vessels. More sustained consideration reveals strain and puckering, as the muslin fabric ground ripples between the strings anchoring the slender, budding branches from which she builds her craft. The simply titled Grid with Sticks (2018) is imbued with the possibilities of clever objects. Schmidt joins together several lengths of thick cotton duck to construct the grid, which is further demarcated by heavy threads to form the vertical axes and by thin, horizontal pieces of wood, tied to the canvas, that occupy each cell. The separate strips of fabric are sewn in straight vertical seams, but the x-axes are made by overlapping the cotton itself to form pleats. Pleating ingeniously cleaves a wide piece of cloth to itself, at once permitting a contraction and expansion of material. Here, the grid is weighty and light, over and under, simultaneously.

Alice Hope’s Untitled pieces (both 2020) are composed of ball chains tightly hanging from door screens that develop falls of densely packed beads. One features golden chains that overlap in choppy rows, ending in a straight edge. The other’s color is salmon pink and resembles a flapper’s skirt fringed with coral beads. Proprioceptive 1 (2021) and K Corona (2021) present thousands of Corona beer can tabs strung together with ball chains or fishing net, respectively. These drape gracefully to the floor from the ceiling and stir slightly with passing visitors or the air conditioning; they mark space, yet we can see through them. In the glinting light and their liquid movements, they recall the delicacy of dewy spiderwebs or the murmuring lapping of calm waters, conjuring the subtlest fluid dynamics.